The other place where we can anticipate a change in the nature of scrap in the U.S. is the appearance in the very near future of a substantial quantity of bismuth-modified cast red and yellow brasses in product and in prompt casting scrap. The major driver for development and application of these alloys has been U.S. regulation of lead in drinking water. The 1991 U.S. EPA Lead and Copper Rule established the most protective lead standard for first draw drinking water in the world. This regulation was based in part on data showing that drinking water retained in faucets, fittings and other in-line devices for a period of hours between use could leach small quantities of lead into the water. It has turned out that the cast lead-containing brasses present the largest problem due to the lead segregated to the inside surfaces during solidification of the casting. Although chemical removal of this surface lead has shown promise in the laboratory, and coating techniques have been tried, the direct approach of using essentially lead-free alloys has proved, for some manufacturers, to be an attractive approach to meeting the lead leaching requirement of NSF Standard 61.

Lead is an important alloying element. It provides the excellent machinability required for high production rates and insures pressure tightness. Bismuth has proved to be an effective substitute for lead, although there were a number of metallurgical problems to solve. Bismuth is nontoxic except in immense dosage. Up to very recently, the Lead and Copper Rule as reflected in Standard 61, has had the largest impact on manufacturers of faucets and small valves within one liter of the faucet. A recent decision by the California Supreme Court has opened the door under the state’s Proposition 65 to suits against manufacturers of all in-line plumbing devices made from lead-containing alloys. It is much too early to know the outcome of these developments, but the use of the lead-free bismuth-modified alloys may be part of the eventual result. Solutions applied to product for the large California market are often applied nationwide to avoid the extra expenses of a separate California product line. 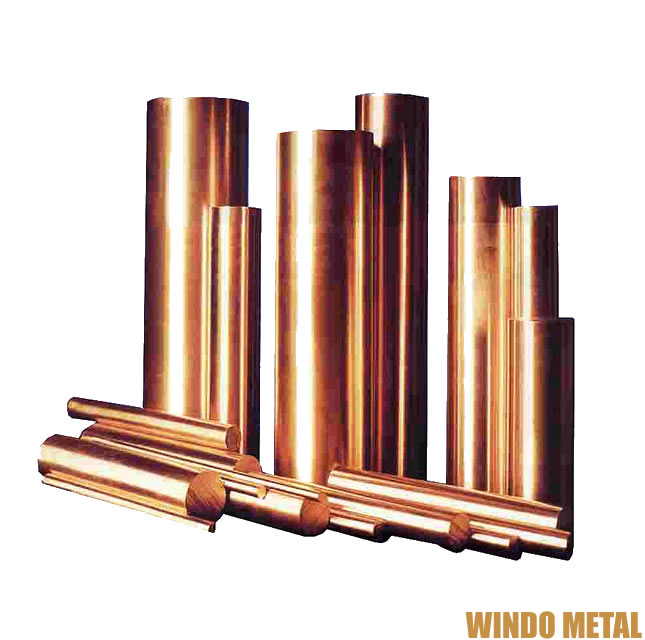 We are now seeing foundries adopting, or considering adopting, the bismuth-modified alloys for a variety of cast products unrelated to drinking water, even including cast bronze bearings. Use of lead-free alloys is one approach for a foundry to employ to meet U.S. lead-in-air regulations and to avoid the expense of disposal of lead-contaminated foundry sands. Whether use of the more expensive bismuth-modified alloys is a cost effective solution for these foundry environmental problems is a complex issue and is in many cases unresolved. The tables below list ten bismuth-modified alloys now available on the U.S. market. C89320 is a bismuth-containing tin bronze bearing alloy. The others are general purpose casting alloys. The alloys using a combination of bismuth and selenium to replace the lead are known as SeBiLOYS. These alloys were developed by a broad based consortium led by the American Foundrymen’s Society with funding and technical input from the CDA and the Brass and Bronze Ingot Manufacturers and included numbers of foundries and plumbing products producers. These alloys are basically one-to-one replacements for the lead-containing alloys. The mechanical properties are very similar (Table 7), although the tensile ductilities of all of the bismuth brasses are somewhat lower than those of the leaded equivalents. Machinability (Table 8) of these alloys is comparable to their leaded counterparts. Some subtle changes in melt practice and pattern design are being learned as experience is gained in using these alloys. Copper Plumbing Alloys In The Scrap Stream

It should not be assumed that the leaded brasses will disappear from the U.S. scene. The cost effectiveness, castability, good machinability and ease of recycling of the leaded brasses favor their continued use for many products. As for wrought products, the leaded free-cutting brass rod alloys have actually benefited from the tough lead leaching regulations for faucets and small valves as numbers of products have been converted from castings to machined rod. Recycling of these bismuth-containing cast alloys will require some care on the part of the industry. Bismuth is, of course, a potent embrittler of high-copper alloys. It will be critical to avoid mixing bismuth brass scrap with the cast engineering alloys such as the aluminum bronzes or copper-nickel alloys. As noted above, the U.S. ingot manufacturers were very much a part of the development of the SeBiLOYs. Maintaining separation of these scrap types is considered to be straight forward. Avoiding the mixing of leaded alloys with the aluminum bronzes and copper-nickels has always been critical. We do expect that leaded and bismuth-modified alloy scrap will become intermixed. The result in time will be that the conventional leaded alloys will carry some bismuth. Experiments have shown no adverse effect on the properties of the cast red brasses at least up to 1.3% Bi in a red brass containing 3% Sn and 4% Pb.  Copper Plumbing Alloys In The Scrap Stream

It is too early to tell how much bismuth-containing alloy will be produced in the U.S. These alloys are, and will continue to be, considerably more expensive than the leaded alloys they replace. In one scenario, their use may be limited to the tightly regulated plumbing products. This might amount to 2000 to 20,000 tons per year, depending on the extent of use by the in-line plumbing product manufacturers. In another scenario, these alloys might be adopted for a much broader range of products now cast in leaded red and yellow brass products. This could be the result of increased restriction on the use of lead, or use of these alloys as the solution to foundry environmental problems. In this case the upper bound is uncertain. Some parts of the markets for cast copper alloys would presumably be lost to competitive materials including plastics due to the increased cost. Limitations on available bismuth supply would also be expected to come into play. It would appear at this point that production of the bismuth-containing alloys will be somewhere within the lower range; i.e., not greater than 20,000 tons. This will however be a significant new factor in the U.S. secondary copper alloy scrap mix.

What is the Crystal Copper Tube